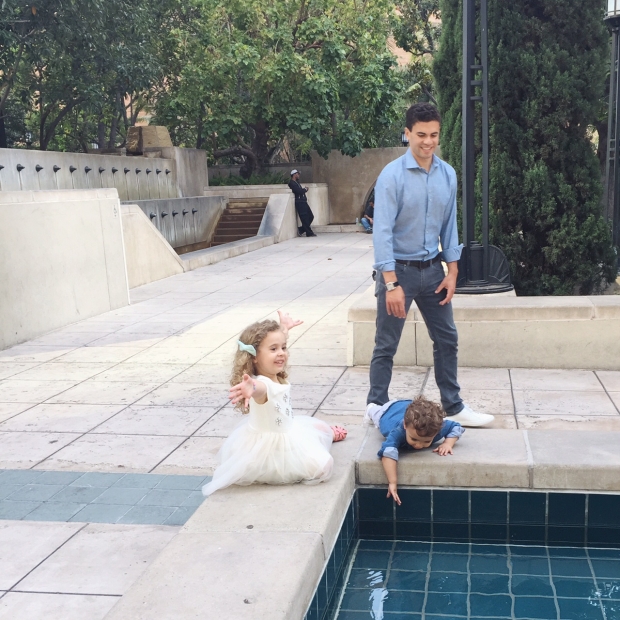 As you may have surmised from the title of this post, the fam and I are headed back West to California (insert gasps of shock and various sounds of disbelief). I know, I know, right? Who uproots their lives this often, and what is it with our complete inability to stay in one place for longer than two years at a time?

I wish I had an eloquent, succinct answer to these questions, but instead all I can tell you is that our lives seem to take us to different places every so often. Emphasis on the word ‘often.’ Things haven’t always been this way in my life, in fact, my formative years were quite the contrary experience. I grew up in the same town, on the same street, in the same house for 18 years until I left for college. If you asked me then about moving every two years, I would have laughed and denied the possibility. I’m a secret homebody by nature; a closet introvert with a penchant for consistency, routines and staying put. And yet, here we are.

Our first move together, while boyfriend/girlfriend, was into a nice new building in Westwood. It was a one bedroom, one bath plus loft, and it was home for us and Rambo – our first child, who just so happens to be a rambunctious Boston Terrier with a flatulence problem and a heart of gold (I also swear he understands English, but I digress). It was perfect. Our two year lease ended just before we took off for our honeymoon in Athens and Mykonos, and we scouted new apartments from half a world away, landing in a walk-up three bedroom townhome in the heart of Beverly Hills. By our first Thanksgiving we added Bentley to the family. Our second fur child, Bentley is a loveable Cavalier King Charles who plays deaf and has pica (he eats odd, totally unappetizing objects whenever he finds them lying on the ground, which has led to many a scare and one very expensive surgery along the way).

During the Beverly Hills glory years the hubs and I both worked from home, taking long evening walks through gorgeous neighborhoods to dine at quaint sidewalk cafes. I was freelance writing while I started my event design and planning firm, The Stylish Soiree, and hubs was traveling a lot and working his way up the corporate ladder. Life was good, but we convinced ourselves we could never raise kids in Los Angeles. They’d surely turn into druggies, assholes, or, worst of all – insert sarcasm here –  entitled underachievers. The horror!

Our remedy to this LA madness was to set our sights on San Francisco. We had romantic visions of SF as a city awash with (counter)culture, art and fabulous food. You know, the way it was before the tech revolution, back when the hubs grew up there. Spoiler alert: it’s not like that anymore. The silver lining of our four years in the Bay Area, however, was our own little gold rush. Serendipitously, we bought our first home in the East Bay when it was still affordable, and rode the real estate wave to our second home on the Peninsula, in the gorgeous little town of Burlingame. We had a knack for buying total dog homes that were stale on the market, and then gutted and renovated them lovingly in a hot sellers’ market. It was magic, from the timing to the perfect buyers and brokers, and ironically we have the tech industry (you know, the same ones we rag on for ruining SF) to thank for that.

Unfortunately, by 2014 the market in the Bay Area was no longer hot for us… it had become scalding. Feeling burned by the insane jump in price to get to that next level home, we bowed out of the market entirely and headed to Chicago’s gorgeous North Shore. After a ten day whirlwind trip scouting all the North Shore neighborhoods, we pulled the trigger on yet another totally outdated home with tons of potential. But this time, instead of trading down in size, we got to triple our living space for less than the cost of our previous home. Ah yes, and this all happened while Miss A was two years old and I was 8.5 months preggerd with Dino. We like to keep our lives laced with plenty of stress and a touch of insanity… no big deal.

If Los Angeles was quagmired in name dropping and the Entertainment Industry, and San Francisco was overflowing with startups and tech dollars, Chicago’s North Shore felt like idyllic perfection. At first, we marveled at how everything just moved so much slower. It was like being back in the 90s before everyone had a cell phone and constantly checked their email / social media. And it. Was. Good. Kids played in their front yards with neighbors, summer block parties and rotating neighborhood cocktail hours were real things, and every one of our neighbors were awesome. Friendly, inviting, inclusive and just good people. If you look up the definition of ‘good people’ it is likely accompanied by a photo of our Wilmette neighbors. Prior to moving there, I thought these places only existed in John Hughes movies… In the 80s and 90s. Turns out, the magic is real and alive in the North Shore.

So why leave heaven on earth? Well, life. Life, and winter. As native Californians, hubs and I had no idea what a real Chicago winter entailed. How bad could it be, we laughed to ourselves naively. We’ll just get some warm coats and it’ll be fine, we agreed. Cue the -12 degree days when you think your eyes will freeze open. Cue us, trying to secure the damn car seat straps on a wiggly 5 month old baby without your gloves on in said weather while sideways ice storms shred your face. Cut to scenes of us slipping and falling on ice in the driveway while trying to shovel ourselves out of an 18″ snowfall, frozen snot running down our noses and dripping onto our numb hands (which gloves cannot actually keep warm in such cold weather). Hauling bags of salt from the store to shake down the driveway, only to have the other half of the bag melt off because we stupid Californians left it open outside, and so as the snowflakes fell they melted our precious supply. And here is another little tidbit no one tells you about Chicago winter… It lasts 6 months. November through May. And the month of June is pretty crappy too. Even Rambo refused to venture outside to poop during the coldest days, which resulted in his having to wear two dog sweaters and hot pink dog boots so he didn’t lose a hairless limb during potty time.

All my life I’ve been programmed to believe that winter consists of December through mid-March. My birthday, March 14th, brings sunshine and flowers in California. What did it bring in Illinios last year? A foot of snow, that’s what. Happy fucking birthday, am I right?

And while taking our crash course in Winter 101 was undeniably rough, I would say that the perks of the North Shore made up for the misery that is January – April. It really makes the summer sun all that sweeter, and I remain convinced that our neighborhood is a Mayberry-esque relic that is stuck in the 1950s, in all the best ways possible. Other life ‘shtuff’ popped up during our two years of North Shore living, and after a while it became clearer and clearer that someday we would end up back in California. That ‘someday’ just happened to come a lot quicker than I think any of us expected.

The past week has seen us list both our home and the townhome on the market, countless showings and a speedy sale of the townhome, and a trip to Los Angeles to figure out where on earth we want to call home in this crazy city. As I write this I am sitting in a lovely hotel, typing out our home-hopping history and shaking my head in disbelief at our wild little lives. I generally think of myself as a fairly boring person, and realize how at-odds that is with our reckless abandonment of various locales in search of greener pastures. And the irony of our resettlement in la la land is not lost on me. This is, dear reader, the city we fled upon vowing we could never raise a child here. Now we are back, 6 years later with two midgets in tow, desperately hoping our assessment from so many years ago was off-base. At least LA is a haven for gluten-free, dairy-free kiddos like mine, right?

All jokes aside, I am determined to find a lovely neighborhood in which to raise our kids, and dream of having neighbors 1/10th as awesome as those we are leaving behind. Only time will tell if we find our pot of gold at the end of the house hunting rainbow. For now, all we can do is hope for and seek a bright, beautiful new future for ourselves in the City of Angels.

Signing off from a room high above Wilshire,